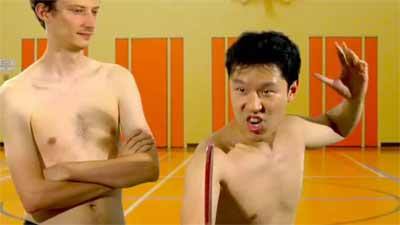 If you’re like me, you wake up every morning thinking: “I wonder if I’m going to see some sweet bare-chested Fred Ngo or other Fred Ngo-related softcore pornography.”

We got a sneak peek back in July with a water fight, but since then he’s been mostly clothed in public.

Well today Barechested Fred Ngo is back, with a bang, in Galacticast’s new episode. He thrusts.

Tod Maffin not-so-subtlely implies that Galacticast should be the next CBC comedy series. (He’s probably still in awe after meeting its creators last week)

I love the idea, if only because it means (a) more Galacticast and (b) they won’t move to L.A. like they’ve threatened to do.

The Globe has a video by Anastasia Tubanos about couples who do video podcasting. Of course, no such list would be complete without Rudy and Casey of Galacticast, who are interviewed in it.

The video is somewhat typical of the state of newspaper-produced video. Since they have no clue what they’re doing, and don’t want to spend any money building a web media infrastructure, they leave everything to the individual producer, from the credits to the music selection. Videos range in quality from atrocious cellphone-quality badly-framed talking heads to semi-professional packages with unnecessarily-long credits.

The quality of content, of course, is always more important than presentation. So I can forgive the tinny audio or inconsistent lighting, especially when producers don’t have sound or lighting technicians. But I can’t shake the feeling that this is all just a gimmick to them, that the newspapers are feeling around in the dark and hoping they can get by without knowing what they’re doing. And independent producers, without formal training or direction from editors and managers, are doing the same.

Casey McKinnon, my future wife the co-host of Galacticast (which promises to have a new show some time in the next eon) is speaking out about being burned by PodTech.

It’s a good lesson for techy startup companies who think that because they’re cool they don’t have to treat people with the same professionalism that other companies do.

Ripping off a photographer is a prime example. I’ve heard countless stories of small magazines asking for people to provide high-quality content free in exchange for only the “publicity” they would get from having their name beside it, and perhaps one day getting a few dollars.

Not having enough money to properly get your startup off the ground is one thing. But PodTech isn’t poor, it’s just lazy.

UPDATE: Credit where it’s due. Scoble has responded both here and on Casey’s post. It doesn’t negate the criticisms, but it mitigates them somewhat. Hopefully PodTech’s act will improve as a result.

Casey McKinnon and Rudy Jahchan, the couple behind the geek-comedy web show Galacticast, have started up a new venture with their company 8-bit Brownies called A Comicbook Orange (sigh). As you might guess, it is a weekly comic-book review series. Its first episode gives you an idea of what it’s going to be like: a mix of B-roll and voice-over that unfortunately looks and sounds like just about every other TV review show out there, mixed in with the fun cheesy-FX sci-fi comedy that have made them the most famous Montreal-based sci-fi sketch comedy web video show in the world.

I met Rudy and Casey for Galacticast’s 1-year anniversary a couple of weeks ago, where they promised a “big announcement” coming soon. I thought NBC picked them up for a short summer run, but I guess this’ll have to do.

While I was at their exclusive VIP party (oh yeah baby, I’ve got it made!), I had a chat with Mommy McKinnon, and after some small-talk about the weather (Casey, why did you leave me in your living room with your mother?), I asked her the only question that came to mind: What does she think of her daughter going all crazy with the Internet stuff instead of, you know, making money?

“She’ll always be my baby,” Mom said. (Awwww…) Though Mom, as a non-sci-fi fan, doesn’t get 90% of Galacticast’s jokes, she watches it every week and fully supports Casey’s endeavour. Which is good, because if I threw away a good job to do this for a living, my mother would think I’m nuts.

Speaking of Galacticast, they’ve upgraded their equipment. A new wireless clip-on microphone will hopefully solve the dreadful echo that has been distracting from the quality of the show a bit, and they’ve hooked themselves up with an HD camera (like the one that filmed this episode).

The show itself has come a long way since I interviewed them back in December, and even longer since the show began. The scripts are tighter, the special effects are less cheesy and the production is more professional (though, without any crew whatsoever, it’s pretty impressive that they manage to do anything on a weekly basis). And when you’re taking on things like LOST, the Muppets, Star Trek’s mirror universe and Super Mario Bros., how could it be the coolest thing in the world?

Xolo.tv (yeah, I never heard of them either — I guess I’m not cool — Martin Lessard is though) recently came to Montreal and have a video podcast up. It features video of the Biodome (it goes on for a while, so you’ll find yourself skipping ahead a bit) and an interview with Casey and Rudy from Galacticast, who are fast becominng the go-to people for vlogging in Montreal (all because of me, I think). The Galacticast interview might have been better with less noise in their apartment/studio, but at least there’s footage of Casey McKinnon’s infectuous laugh.

It’s voting time for the Vlog Deathmatch air guitaress challenge, a hilarious competition between some female video-bloggers, including Montreal’s Casey McKinnon of Galacticast (her entry). According to the official rules, the contestants have to perform 30-60 seconds of silent air guitar with no edits or cuts. That makes for some strange-looking videos, reminding us that air guitar without music just looks weird.

Speaking of Galacticast, who can now count Kevin Smith as a fan, there’s video online of them being interviewed on Global’s This Morning Live by resident interviewerbabe Gelareh Darabi. I still think my interview with them was better.

Meanwhile, their latest episode is a funny mashup of Super Mario Bros. and the Sopranos. Watch it.