I guess that’s what you mean by “aggressively represent the interests of our clients”. Maybe that’s what won you your Silver Anvil Award. How else can you deliver “measurable business results for many of the world’s largest companies and most successful brands, including … General Motors“? Your 70-year-old company whose history seems to be nothing but corporate merger after corporate merger, is clearly in the best position to do this kind of marketing. Especially when you’re doing marketing of a Canadian event from your office in Ann Arbor, Mich., instead of Toronto (or, say, Montreal).

Such a big firm, I feel a bit silly doing this. But can I offer a few suggestions for future marketing campaigns?

I had contemplated taking you up on your invitation of free food (I’m not crazy about skiing or snowboarding) and discovering just how such giant marketing events work, how spending so much money could “impact behavioral changes” enough to justify the expense. Unfortunately, I’m working on Saturday so I can’t make it.

Besides, this is more fun. And I can keep my dignity. And I don’t really care for iced tea.

p.s. Building a snow hill in summer? That’s crazy. I should blog about that.

I was busy at work today putting the sports section together (apparently there was this tennis match or something), so I didn’t check my non-work email until I got home. I came back to find 17 new messages in my inbox, which is unusually high. A lot of them were delivery failure messages, which made even less sense.

Looking through them, it was obvious someone was sending out spam mail with a forged address at my domain. I foolishly setup a catch-all for that domain so everything goes to me. None were angry messages professing eventual death, which was nice. Some were away-from-my-desk messages, others were anti-spam confirm-you’re-a-real-person messages. The rest were bounces.

Then I looked in my spam box. There were hundreds of bounces. At least 300.

Thankfully I have Gmail, so cleaning that up was pretty simple.

UPDATE: I wake up, and the same thing happens again.

There are various levels of immorality on the Internet that people with no shame have exploited for their own ends:

Well now we have all the above rolled into one: 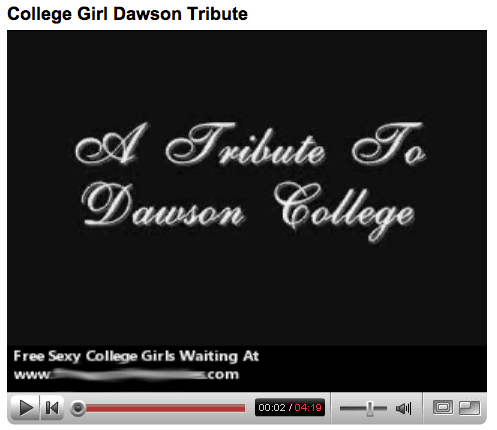 The reason? The original video had “college” and “girl” in its description.

As promised, today’s article in Business Observer discusses brick-and-mortar companies who violate email netiquette and send unsolicited marketing emails to people. It’s based on three companies I talked about in my “not above outright spam” series:

In all three cases, I can only theorize about why my email was added to these marketing lists, because not one of them responded to repeated requests for an explanation, the first as a regular spam victim, the second as a reporter researching a story. CIBC’s media relations guy asked for more information about the email, but I never heard from them or their email services provider Komunik again.

A fourth company, Chapters/Indigo, was left out because (a) the article was already way too long, (b) they responded to my request and investigated promptly, and (c) their investigation determined that my mother signed up for an account there two years ago. Here’s what it would have looked like:

Indigo’s email followed what has apparently become an industry standard of having people fill out web forms before they can unsubscribe from email lists. And like other companies, it assumed I have an account and wouldn’t let me unsubscribe unless I logged in. But Indigo responded promptly to my initial complaint with a thorough investigation.

Well, actually ThinData found a blog post I wrote with the complaint and then alerted the company. Within two days I had a response from Indigo’s customer service director explaining that someone else (my mother) had used the address to set up an account in 2005, and they have “only recently been reaching out to our past customers.” He unsubscribed me from the list and apologized for problems I had unsubscribing. Both Indigo and ThinData provided copies of extensive privacy and anti-spam policies.

The original message violated some best practices for email marketing that ThinData swears by, such as providing a simple one-click way to unsubscribe. Nevertheless, the provider accepted the response from Indigo and said they “consider this matter resolved.”

That last part sort of irked me. Despite promises that they’re 100% against spam, these companies seem to defer to their clients when it comes to actually determining whether policies are being followed. Explanations are accepted at face value and no independent investigations are done.

The article also includes some suggested best practices for commercial email marketers, compiled from industry sources and the Canadian Task Force on Spam. Hopefully some companies will be a bit more strict about conforming to them.

I’ll let you know if any of these companies decide to respond now that the article is out. In the meantime, do you have any spam gripes about companies that should know better?

Got this text message yesterday from a shady outfit called “Cell Unlimited” (typos are theirs, not mine):

I have, of course, never even heard of this outfit, much less had any business dealings with them that would give them the impression that they could text-message-spam me.

I’ve requested an explanation and will update this post if I get one.

(For the curious, the company is an automatic callback service that turns outgoing calls into incoming ones so those with unlimited incoming call plans can get free minutes. The fact that it costs $10 a month makes me wonder if it’s really worth it for most people.)

In my ongoing fight against spam, I tend to give local businesses a bit of slack when it comes to netiquette. They’re small and inexperienced, so you might forgive them for minor glitches.

But spam is still spam. Last week I received this email message from Montreal-based Kanuk, maker of those winter coats you’ll all be buying in the coming weeks. Since they have a privacy policy which implies they only send email messages to people who opt in, I have to call them on a violation.

As usual, I’ve sent them an email and will update if and when they respond.

The email was sent through Canadian B2B Internet service provider Radiant, which should also have better measures to prevent such things.

Going through my spam folder again today, I noticed an email from Rogers, my wireless provider. It was a promotional message (as opposed to the one I get every month telling me my bill is ready) announcing, and I kid you not folks, that they redesigned their website.

Since I’m not a fan of spam, especially from large companies that should know better like Chapters/Indigo and CIBC (the latter — a bank — has still not responded to my request for an explanation beyond assigning it a support ticket number), I couldn’t let this one go without mentioning it as well.

The big difference here is that I am a Rogers customer, so they didn’t harvest my email or take it from an old form gathering dust in their basement. But I call it spam because I never asked for it and it’s purely promotional in nature.

I’ve filled out an “abuse” form and emailed the sender of the email message asking for an explanation of how I got this email. I’ll update if I get one.

I was going through my junk mail folder and I came across an email from CIBC whose subject line is in French. French-language spam is pretty rare, so I tend to give it a second look.

Turns out it’s a legitimate CIBC email (they have a copy of it on their website) having something to do with their VISA card.

And just like the Chapters email I got last month (their email provider promised to get back to me “ASAP” but I never heard from them again), it’s something I never asked for, sent to an address that gets just about nothing but spam, from a company I’ve never done business with in my entire life. Neither I nor anyone in my family does banking with CIBC, and I have no idea how they would have my email address.

Like I did with Chapters, I checked their unsubscribe process. The link sends me to this web page which asks for, among other things, my name, phone number and last four digits of my CIBC VISA credit card. All fields are, of course, required.

There’s a few problems with this:

Considering that this message seems to clearly violate CIBC’s own anti-phishing policy, as well as being outright spam, I’ve sent them an email asking for an explanation. I’ll update this post if they provide one.

I’ve copied the email to Komunik, makers of Konversation, the CIBC’s email marketing provider, demanding to know how they don’t consider this spam.

I just received this spam email from Chapters/Indigo:

At first I thought it might be a phishing exercise, since I’ve never received such an email before, I haven’t shopped at Chapters/Indigo in ages and I certainly never gave them an email address I haven’t used in about as long. But there was no “your account will be deleted within 24 hours” warning nor any request to log in. A few quick clicks confirmed that the email did in fact come from the organization.

I might be able to forgive a small-time local outfit who sent out a quick ad for itself to people in the CEO’s address book unfamiliar with netiquette… 10 years ago. This is just inexcusable. I did absolutely nothing to request this email. My best guess is that they dredged up their archives from years ago and just harvested the email addresses assuming no one would complain.

The unsubscribe process adds insult to insult. You’re asked to “sign in” using a password that you don’t know because you never signed up with them. You then go to the “forgot your password page” and input your email address. Then you click “submit” and … nothing happens. No confirmation page. No email with your password. You’re stuck on this list forever.

I have sent Chapters/Indigo an email demanding an explanation. I have also contacted Toronto-based ThinData, as the email was sent through their servers. I will update this post if one is given from either company.

UPDATE (9:30pm, 4 hours later): I’ve received an email from a VP at ThinData asking me for a copy of the email I received (do they not keep copies of the mass commercial emails they send out?). The email, naturally, came not after I emailed them as an irate web user but after they discovered this blog post. He promises to look into the matter “ASAP”.

So looking through my emails, I notice that Hollis’s boyfriend keeps slipping out of her, while Mindy’s boyfriend’s horse-like shlong is too big for her.