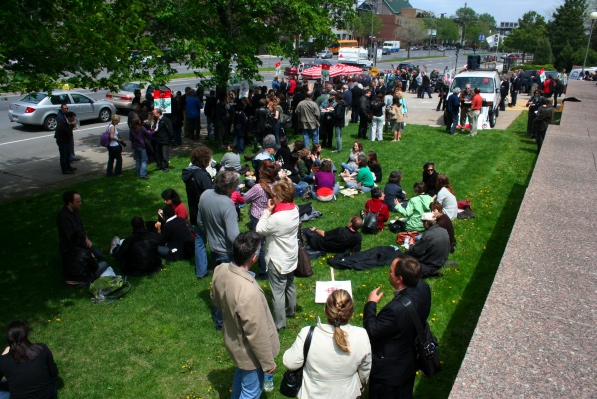 I'm horrible at crowd estimates. Guess for yourself how many people turned out.

Tuesday was the day the CBC was supposed to announce which of its employees it was going to lay off. The SCRC, which represents CBC and Radio-Canada employees in Quebec and Moncton, planned for a day of mourning at noon to draw attention to those names.

Unfortunately, the CBC made no such announcement, and the people who turned out still don’t know who’s being fired and who’s being kept on, even though the corporation has already started the process of laying people off.

END_OF_DOCUMENT_TOKEN_TO_BE_REPLACED 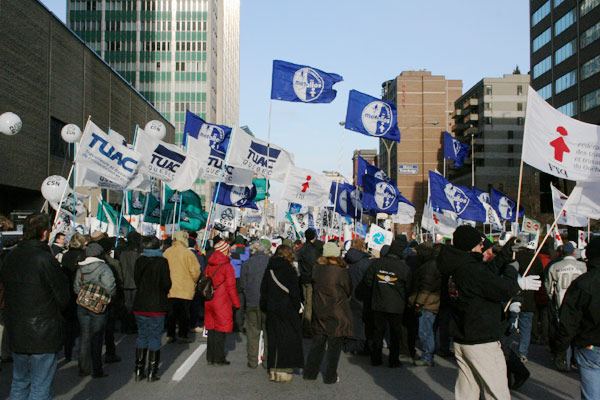 Spot the non-union flags at this protest

On Saturday, I went downtown to Protest Central (the Guy Favreau building) to check out the pro-coalition protest. I had wanted to stop by the “Rally for Canada” anti-coalition protest, but that never materialized in this city.

Coming out of the building, I noticed a lot of presence from labour unions. I did some quick number-counting. There were 150 flags with union logos on them. The number of signs, flags and banners without union logos were so few that I have pictures of them all below.

The numbers, and the speeches given during the rally, showed something worrisome: this protest wasn’t about the grass roots standing up for democracy. It was about unions and separatists wanting to push the government more toward the left.

END_OF_DOCUMENT_TOKEN_TO_BE_REPLACED

A spoof on the Gazette’s “words matter” TV campaign (not the first one either), to get people to pay attention to what’s going on in contract negotiations and sign a petition (now with over 5,000 signatures) put forward by the union. A Facebook cause has also been setup with 343 members.

UPDATE: Another video has just been posted.

Meanwhile, CTV News Montreal covered the Gazette union situation last night during its noon-hour and evening newscasts (Windows Media video). It includes an interview with Bernard Asselin, the VP of marketing and reader sales, who says that pagination is a “technical” job, and so it shouldn’t matter if it’s centralized in another city. He also says that “our goal, which is the same as the union’s, by the way, is to protect local content.”

Members of the Ottawa Newspaper Guild, which represents workers in the newsroom of the Ottawa Citizen, have accepted a contract offer that includes wage increases of 2.5% the first year, 2% the next three years and 2.5% the final year.

This sets the stage for a coming strike vote at the Gazette this Sunday.

And the union executive isn’t happy about the rejecting of their recommendation. 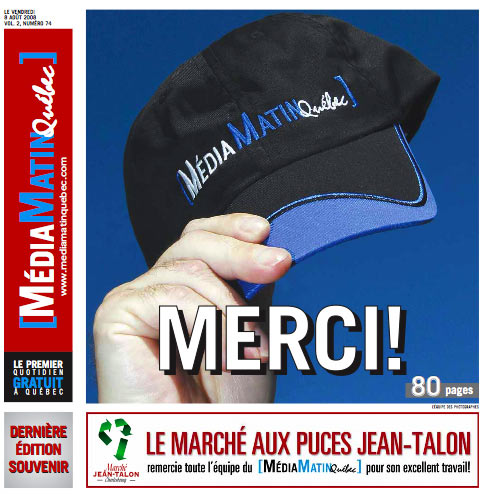 After more than 15 months, 317 editions and 12.5 million copies, MédiaMatinQuébec, the paper put out by striking and locked-out workers from the Journal de Québec, published its final issue this morning (PDF). Next week, the 252 workers return to the Journal de Québec and start re-learning how to do their jobs (which now will include increased use of multi-media for journalists), thanks to the deal that was approved last month.

In other words, it’s ok to like the Journal de Québec again (though it remains to be seen what it will take in from all that the employees have learned from putting out a paper over 15 months).

The MMQ’s final issue, at a staggering 80 pages, is filled with congratulatory ads from local businesses and unions, as well as retrospectives on the paper and the union’s long fight. In fact, other than the crossword and horoscope, that’s all that’s in those 80 pages. Stories about the 15 months of the paper’s existence, a collage of the best photos used in the paper, and mostly first-person retrospectives from dozens of employees who struggled through 15 months working in a cramped office, getting up early and standing in traffic handing out newspapers for pennies of strike pay. (Michel Hébert has a more poetic obit on his blog as well as a copy of his final column.) It’s also interspersed with comments from readers who say they’ll miss the free paper with no filler material, no wire services and 100% local news compiled by dedicated professionals.

You’ve never seen so many people happy to see their paper cease to exist. But then, that was its goal all along. The deal reached with the Journal wasn’t what either side wanted, but it was fair. And now everyone can return to work and start receiving a proper paycheque again.

More importantly, MédiaMatinQuébec may have changed the face of media union pressure tactics forever. Taking what happened during the CBC lockout to the next step, they put away their baseball bats and picket signs and protested by doing their jobs. And the public loved them for it.

After six years of failed contract negotiations, CUPFA, the Concordia University Part-Time Faculty Association, has instituted “rotating strikes” which sound more like “picketing between classes”. Among their demands are pay equity with full-time teachers (represented by another bargaining unit, CUFA) as well as basic job security, if only so that students don’t see “TBA” listed as their professors for upcoming courses.

Concordia University has declared that the show must go on though they will tolerate CUPFA’s tactics. Students must still complete all work, handing it in to departments directly if necessary.

Part of CUPFA’s tactics include setting up a YouTube channel and posting videos.

Among the details of the agreement, according to Michel Dumais:

Hopefully this will set a precedent for other unionized papers in Quebec who are facing similar problems with journalist multitasking.

The Tyee has an article about work being outsourced from the Vancouver Sun and Vancouver Province newsrooms into non-unionized positions in Hamilton, Ont. Currently, Hamilton takes care of things like stock pages and sports scoreboards, work which can be replicated for more than one paper. The TV Times is also produced out of one location, with the local programming grids and paper’s logo slapped on at the end. But now CanWest’s Vancouver papers are sending more pages to be done there, which is worrying union leaders.

Sun editor-in-chief Patricia Graham calls the layout being transferred “essentially a mechanical function.” The article doesn’t give details about what exactly is being transferred, but I’m guessing it’s debatable how “mechanical” such a function really is.

UPDATE (Nov. 10): J-Source has another post on the CanWest situation, including a union response alleging that Global is violating its CRTC licenses by centralizing its newsrooms.