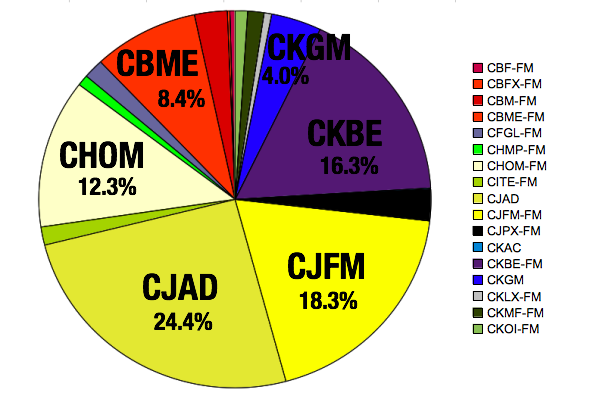 Normally I don’t pay much attention to them, because the changes are so insignificant. But with some major programming changes this fall, and some corresponding jumps and plummets in audience, it’s worth taking a closer look this time.

Here are some more objective highlights from the ratings numbers from what I’ve been able to find. The top-line numbers from BBM Canada are here (PDF, first page is English audience, second page French audience). You can compare that to the spring report or last year for the same period.

Astral Media also does a presentation (PDF) that looks into the numbers overall for key demographics, and for important time periods for adults 25-54, which advertisers apparently covet.

Overall (adults 2+, seven days a week), CJAD is still the highest-rated station in the Montreal English market. It has a 24% market share, within 0.2 percentage points of this spring and last fall. But it’s losing audience in key demographics, especially young adults. In the 18-34 demo, it’s down from 17% this spring to 11%. Though losing rights to Canadiens games is undoubtedly part of that, it’s not the whole story.

If CJAD thought Aaron Rand would give a ratings boost for its evening drive, that hasn’t happened. Its audience for 4-7pm weekdays is stagnant, and it has dropped to fifth place, behind Mitch Melnick on CKGM, for 25-54.

The biggest change to CKGM is the addition of Canadiens games, which is giving a significant boost to the evening audience, making it No. 1 on game nights. “Canadiens games are registering an impressive 28.2 share among males 25-54,” Bell Media’s Greg McIsaac tells me. Previously, the station was fifth place with a 3.7 share during that time period. Now, overall, it’s 19.8, ahead of Virgin Radio, station manager Wayne Bews tells Mike Cohen.

But the station is seeing ratings gains everywhere. Overall, CKGM is reaching more listeners, 131,000 a week compared to 93,000 in the spring. Its market share overall has gone up from 2.7 to 4.

Mitch Melnick’s afternoon show has the most impressive gains, going from 3,490 to 4,540 listeners during an average minute, representing a 30% increase in audience. It was enough to push CKGM past CJAD for this time period among adults 25-54, particularly impressive since he’s now up against Aaron Rand.

For me, the big question out of this is: Was getting Canadiens games worth it? Obviously they won’t get into details about their business plans, but the mood seems to be pretty positive.

Bell Media also wouldn’t comment on whether the station is still losing 30% of its audience after dark, as it complained to the CRTC during hearings that eventually granted it the right to move to the clear channel of 690 kHz. But critics might argue it’s hard to get a 28% share if you’re having significant reception problems.

If anything, the more likely scenario is that anglophone listeners who tuned into CKAC are coming back to CKGM. The French all-sports station had a 0.5% share among anglophone listeners. Stands to reason many of them would prefer hearing sports-related news and commentary during the day.

They called it a brand new radio station. They wanted to shed all remaining remnants of the old Q92. But despite all the changes, it has still inherited the old Q ratings. The station has a 16% market share overall, which is actually down slightly from last year.

But general manager Mark Dickie still has a happy face. (Well, I assume he does. He seemed content when I chatted with him over the phone.) That’s mostly because CKBE has made the strategic decision as part of the Beat rebranding to target the 35-44 female demographic that competitor CJFM seems to have abandoned, and it’s seeing corresponding gains there, and Dickie says they’ve managed to do that while continuing to grow its 45-54 female demo. Overall, from 9am to 4pm, it has a 30% market share for women 35-54.

“It’s pretty well what we were hoping for in the first book,” he said. Among his cherry-picked highlights, the breakfast show with Cat Spencer and Sarah Bartok has surpassed CJFM among the key demo and has gone from fourth to second (behind CJAD) among adults 35-54. (Expanding to adults 25-54, it’s still third, but gaining on second-place CJAD.)

Besides the new morning show, the Beat has also focused on weekends, moving Ken Connors to a beefed-up weekend morning show and bringing star Nat Lauzon in for weekend afternoons.

“It’s definitely paying off,” Dickie says of the decision to focus on weekends, and of the Beat rebranding in general.

Of course, a lot of that is the promotional blitz that comes with a station rebranding. We’ll have to give it another ratings period to see if this audience is sticking around.

Virgin is still the market leader among adults 18-54. The only big demo it’s lost control over is men 25-54, where CHOM has snuck into first place. The morning show, which took on Freeway Frank Depalo this year and is about to lose Lisa Player, has kept its audience. Its audience during midday, which has lost veteran Nat Lauzon, hasn’t seen a significant change among adults 25-54.

Virgin’s on-air lineup is young, and midday hosts Andrea Collins and Nikki Balch are new to the station over the past year. But if it ain’t broke, don’t fix it, I suppose. “As the leader our plan was not to react,” Brand Director Mark Bergman tells Cohen.

Even though CHOM is in a period of transition as it awaits the return of Terry DiMonte on Jan. 9, this has actually been a pretty good ratings period for the station. It’s up just about everywhere, except among women and during the drive-time show, where it’s stagnant. It’s now first overall among men 25-54, overtaking sister station CJFM. Even the morning show has picked up listeners, though it still sits fourth among English-language stations overall.

Overall, Radio One’s market share is still 8% among anglos, which hasn’t changed over the past year. For Radio Two, there’s been a slight drop in overall audience, going from a 3.1% to 2.6% market share.

Programming changes: Incorporation of sports programming in evenings after closing of CKAC Sports.

Cogeco Nouvelles, in a totally unbiased press release masquerading as news, declared 98.5 the most listened-to station in Canada. I’m too lazy to confirm that, but they’re not making up their significant market gains.

Overall, the station has jumped from a market share of 12% last fall to 20% this fall. That’s incredible. It’s gained throughout the day weekdays (it’s stagnant on weekends, when it plays music). The morning show, hosted by Paul Arcand, has gone from 33,000 to 45,000 average listeners a minute since last spring, a 37% increase. It’s a 47% increase if you count from last fall.

In the noon and early afternoon periods, CHMP has rocketed past three other stations, CITE, CKMF and CKOI, to jump from fifth place to second among adults 25-54.

Demographically, the spike is most pronounced among men 25-54, where it was once in a three-way tie for first place with NRJ and Rythme FM, but is now way ahead (28% to 20%). But it’s also ahead among women and young adults.

Unsurprisingly, the station has seen an increase in ratings during the evening, where it has replaced repeats of the day’s talk shows with sports talk and Canadiens broadcasts. “Its new sports programming has proven a contributing factor to the station’s growing success,” says Cogeco. But that’s not the whole story. Simple math shows that adding all of CKAC’s former audience to CHMP only accounts for about half its increase in market share. Something else is causing more people to listen to the station and/or for longer.

It shouldn’t come as a surprise that since its switch Sept. 6 from sports talk to traffic, CKAC has plummeted in the ratings. But that was expected. Last fall, it had a 4.1% market share. This fall, it’s 0.5%.

Where CKAC’s morning show had an average minute audience of about 9,000, Radio Circulation is only 1,290. Similar drops happen across the schedule and across demographics.

Still, CKAC reaches more than 1 million listeners a week (counted as those who listen at least a minute in a week).

In its application to the CRTC this spring to put a French-language traffic station on 690AM, Cogeco estimated a French-language traffic information service as having a market share of 0.8%, with a total 265,200 weekly listening hours. That number, they said, would double as of the third year. As it turns out, they’re behind that estimate a bit (even though there’s one fewer station to compete with).

There haven’t been much changes to the music stations on the French side, certainly not much of interest to anglos.

Among young adults (18-34), Astral’s CKMF (NRJ) has overtaken Cogeco’s CKOI for first place, going up six points with a corresponding drop of six points for CKOI.

CKOI’s overall market share has dropped from 9.8 last year to 6.6 this fall, a significant drop. Why Cogeco would say it’s proud of the station’s performance is beyond me.

12 thoughts on “Radio ratings: A good fall for Cogeco and CKGM”