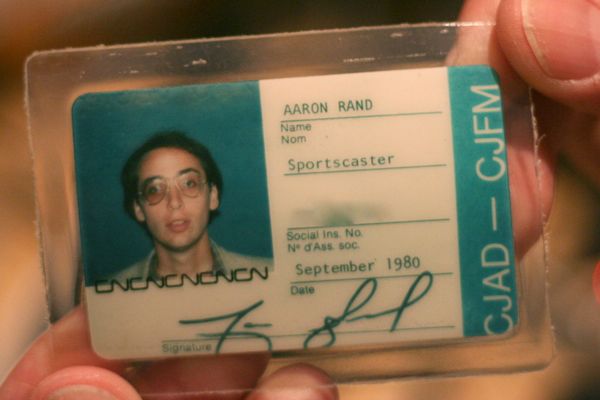 Aaron Rand's ID card from 30 years ago, unearthed by Rob Braide in May. (I've blurred out his social insurance number so you don't identity-theft him)

When your goal is to get a job as a radio host at a commercial English-language radio station in Montreal, your choices are rather limited.

Aaron Rand left CFQR (the Q) in May after more than 20 years when it became clear management wasn’t eager to renew their contract with him. At the time he wasn’t sure where he would go, but he knew he wanted to stay in Montreal, he wanted to stay in radio, he didn’t want to work at a station like K103 and he wanted to have some editorial freedom wherever he ended up. With the Cogeco door slammed pretty tight behind him, the only game left in town was Astral, and he was hoping for something at either CHOM or CJAD (the latter being the better choice because it would mean more talk time and less of being a DJ).

Now it seems Rand has gotten his wish. He won’t be reunited with his former partner Paul (Tasso) Zakaib, but he will have a show on a popular radio station. Rand announced on Facebook and The Gazette published an article about the same time, both saying he is taking the weekday afternoon slot at CJAD, 3 to 7 p.m., starting Sept. 6 (the day after Labour Day). Note that this puts him directly opposite Mitch Melnick on Team 990.

The CJAD timeslot Rand is taking over is currently held by Ric Peterson, and there’s a bit of musical chairs as people are shuffled into new slots. The details, according to The Gazette and other sources:

Rand’s Facebook fans are thrilled, and the positive reaction to his return to the airwaves easily drowns out those who are disappointed by Laxer, Delmar and Dowson losing their shows. (On the Radio in Montreal discussion group, moderator Sheldon Harvey is a bit skeptical, suggesting that people might not be sufficiently prepared for a switch from music to news/talk programming)

It’s disappointing that young talent has to suffer to bring back a star, but as many people in the industry have told me: That’s the business of radio.

Meanwhile, at Rand’s old home at 92.5, changes are afoot for the same day. Cat Spencer takes his job as Rand’s morning-show replacement, and the station is rebranding itself “The Beat”, less than two and a half years after rebranding itself from “Q92” to “92.5 the Q”. It’s unclear what kind of format change will come along with the rebranding, but there’s speculation that the station will try to be more like CJFM (Virgin Radio 96) in order to steal some of the No. 1 station’s audience and give Montrealers even less choice in music selection on the radio.

John Bartlett to be voice of Habs for Team 990

It’s probably a coincidence, but competing AM station Team 990 also has a Thursday announcement that was leaked to The Gazette. John Bartlett, formerly the announcer for the Toronto Marlies (the Leafs’ farm team) will join CKGM as play-by-play man for the Canadiens. The station won the rights to Canadiens games away from CJAD this summer.

Bell Media says colour analysts (they used the plural) will be announced in the coming weeks. The Gazette’s Hockeyinsideout.com has an interview with Bartlett, which appears in Thursday’s paper.