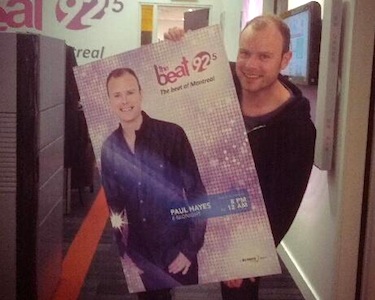 While the public and the media was hyperfocused on René Homier-Roy’s final morning as host of C’est bien meilleur le matin on Radio-Canada (see audio, photos, video, Gazette story, HuffPost Québec story), there was another emotional goodbye on Montreal radio just a few hours earlier.

Paul Hayes, who we learned last month was leaving 92.5 The Beat to return to the U.K., hosted his final show on Thursday night. He had been the host of Heartbeats, from 8pm to midnight, since shortly after the station launched in 2011.

If you missed it, no worries. He recorded his final message on air and posted it online. He says it’s the first time he’s ever cried on air.

“Over the last few years, I can honestly say that I’ve had the biggest career high of my life. It simply won’t get any better than this for me,” Hayes said, struggling through tears as he thanked his bosses and coworkers and listeners, and promising to come back to visit often.

“Who knows, maybe I’ll be back on the radio here one day too. I’d like to think it’s a possibility,” he said.

He also posted a note to his Facebook page thanking Montreal listeners:

It was the most impossible decision I’ve ever had to make in my life.

I cannot put into words how totally incredible this experience has been – It’s the biggest highlight of my career to date. To be broadcasting in North America and to have felt so welcomed by the people of Montreal has been amazing.

The Beat is the most fun and enjoyable place I’ve ever worked, full of talented people – a creative, relaxed, encouraging environment, and the best bosses anybody could EVER wish to have, in Leo Da Estrela Mark Dickie and Andre St-Amand.

I will always have a place in my heart for this city and the radio station, and I take away some of the most incredible memories. I don’t know if it could ever be better than it’s been here.

I felt the need to re-connect with the UK, friends, family, and have some time to catch up with myself a bit, as the last 3 years have been a total whirlwind.

I will be back to visit (probably in the summer months) and I know I’ll keep in touch with a lot of people from here, who have become very important friends in my life.

Thank you everyone in MTL! Much love. XX

About the same time Hayes was saying his goodbyes, Jeremy White announced on social media that he’s taking over Hayes’s former timeslot. White, a Kahnawake native, started working at K103 while he was still in high school, and has been at The Beat for a little more than a year, doing those thankless overnight shifts.

White’s enthusiasm for music quickly earned him high praise from his bosses at The Beat, who see a lot of potential in him, so this promotion makes a lot of sense.

7 thoughts on “Paul Hayes says goodbye to The Beat”