Over the past few months, one of the questions I’ve been asked a lot is what is going on with the group known as TTP Media. The group, composed of businessmen Paul Tietolman, Nicolas Tétrault and Rajiv Pancholy, has licences for three AM radio stations in Montreal, none of which has launched yet. And none of them has said anything publicly for months.

Some of those inquiries have come from people looking for jobs at these new stations, which have promised to invest heavily in local programming and local news. Others have come from radio watchers excited about having something else to listen to. And some are from people who have a beef with CJAD and want to see competition as soon as possible.

Since May, I have been trying to get answers from all three of them. And it has been proving strangely difficult. Tietolman, who had previously been very talkative about the new station, without giving away any secrets, clammed up, asking me to speak with Pancholy, who is the managing partner.

Pancholy told me he didn’t have anything to say at the moment, but that I could expect an announcement in the next four to six weeks that would answer most of my questions.

That was May 23. Despite repeated phone calls, I haven’t spoken to Pancholy since. (That’s 20 weeks ago, in case you’re counting.)

Tétrault, for his part, has at least been getting back to me. “Our group is very much alive and hard at work,” he wrote me in an email on Aug. 20. “However, we do not want to announce anything till we are fully ready. I hope you understand. We will contact you when the time comes.”

On Oct. 3, in response to another request for information as the deadline to launch the first of those three stations approaches, Tétrault said “we do not like to talk about our plans” but that he’d make an exception to tell me this:

In the current business environment, it makes business sense to launch multiple radio stations as close to each other as possible. Consequently, we had requested that our implementation deadline be extended. The CRTC has recently responded favorably to our request.

We do not have any other comments at the moment.

Tietolman had told me something similar the last time I saw him in person, during the Bell/Astral CRTC merger hearings in May. The group wants to launch its English and French news-talk stations at the same time. (The three have gone back and forth on this plan a bit, first saying they would launch simultaneously, then saying they wouldn’t have to do that, and now saying they want to do that again.)

News of this extension will no doubt fuel more rumours out there about why this group has disappeared from the public radar.

The first time this group came onto the media scene was in 2010, after Corus and Cogeco announced that the latter would purchase the former’s radio stations in Quebec, including CFQR (Q92), CHMP (98.5 FM), CKOI and CKAC in Montreal. The total purchase price was $80 million.

Tietolman, the son of CKOI and CKVL founder Jack Tietolman, and Tétrault, a realtor and former Montreal city councillor, formed a partnership and announced an $81-million bid for those stations. The bid wasn’t taken seriously by Corus, which had already signed an agreement with Cogeco, and with CRTC approval, the Cogeco purchase of Corus Quebec was closed on Feb. 1, 2011.

A few months later, the CRTC published applications from Cogeco for new radio station licences at 690 and 940 AM, frequencies that had been silent since the shutdown of Info 690 and what was once 940 News. Cogeco had come to a deal with the Quebec government to fund a traffic station in each language. And since it had bought the transmitters used for those stations in the deal with Corus, it was able to reactivate them easily.

But while Cogeco expected a quick approval of its use of those frequencies, other groups wanted a public hearing to consider other options. Tietolman-Tétrault was one of those groups, saying they had a better plan for those frequencies. “Those two frequencies would be on air shortly after the granting of licences,” the pair told the CRTC.

In October 2011, the CRTC held a hearing to discuss five applications for the use of those two frequencies. Cogeco had by then converted CKAC to an all-traffic station, and kept only its application for an English all-traffic station. Bell applied to change the frequency of CKGM (TSN Radio) from 990 to 690 to improve its signal. Newcomer Dufferin Communications (Evanov Radio) applied for an LGBT-themed station.

And there was Tietolman and Tétrault. They teamed up with Rajiv Pancholy, a wireless industry executive who was a former CEO of Fido before it was bought by Rogers. They incorporated as 7954689 Canada inc., operating under the name Tietolman-Tétrault-Pancholy Media or TTP Media for short. The company, owned 1/3 by each of the partners, submitted applications for English and French news-talk stations for 690 and 940. During the hearing, in which they were accompanied by plenty of guys in suits to show how serious they were, they told the CRTC that the two applications were not severable and that other frequencies would not be acceptable to them.

The CRTC called them on their bluff when it awarded only 940 to the group for the French-language station. CKGM got 690, and Dufferin was given CKGM’s old frequency of 990. Cogeco and TTP Media were invited to re-apply if they could find another frequency acceptable to them. (Cogeco never did — its English all-traffic plans have essentially been abandoned.)

TTP Media did reapply, for a station at 600 AM, the former CFCF/CIQC frequency (and using the same transmitter site). With no competition or opposition, it was approved last November. And then the group applied for a third licence for a French-language sports talk station on CKVL’s old frequency of 850 AM. That application was approved in June.

The group also applied to launch FM music stations in Toronto and Calgary. Both of those had stiff competition (Toronto’s 88.1 FM had more than 20 applicants) and it was successful in neither.

TTP’s three licences, like all licences for new radio stations, came with a two-year deadline from the date of the decision to launch. This means the following deadlines:

With the extension Tétrault mentions above, the French-language station will now have until Nov. 21, 2014, to launch. Normally, the commission will grant a one-year extension without too much hassle, and then another one, and refuse any further extensions. (These requests are not subject to public comment and decisions are posted in bulk weeks after they’re made.)

I can understand the group’s desire to keep some secrets. Lots of media do that, even when it becomes ridiculous sometimes. And from the beginning, there has been a desire to keep close to the vest a programming strategy that the group hopes will be nothing short of a game-changer in radio broadcasting.

But after two years, there’s been no news. The only thing we know has been secured for the two news-talk stations is the transmitter. TTP signed an agreement with Cogeco to rent the former CINF/CINW transmission site in Kahnawake for a price that reaches into five figures a month.

There has been no word on any on-air staff. No word on studio location. No word on programming. No word on branding, callsign or anything else. 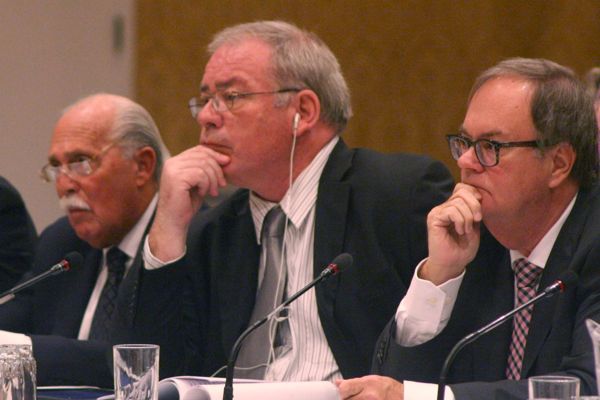 As far as I can tell, this group has no employees. In addition to consultants, three people were brought to the first CRTC hearing and presented as people who would be involved in these stations: broadcaster Jim Connell, who was expected to be an on-air presence on the English station and former radio executives Steve Kowch and Yves Guérard, who were expected to be program directors or station managers at the English and French news-talk stations, respectively.

Connell is no longer in the picture. Late last year he accepted a job as a control room director for Global Montreal’s morning show. He wouldn’t say why he left the project, but impatience with the progress toward launch was undoubtedly a factor.

Kowch and Guérard are still involved, but neither is in Montreal and neither is being paid. Kowch, who has been soliciting ideas about programming from radio watchers through online forums including his blog, is waiting for the word to move here and begin putting a programming plan into action. Until then he’s in Toronto and not on the payroll. Guérard, who I couldn’t reach, is apparently in Florida in a similar situation.

It just seems so odd that a group that was so impatient, so eager to spend millions of dollars on a dream, has virtually nothing to show for it two years later.

In the meantime, I’ve heard plenty of rumours. There’s a rift between the partners and they’re breaking up. One of them is buying out the other two. Or two of them are buying out the third. They’re in way over their heads and don’t know what they’re doing. They’re waiting to see if they can buy existing stations first. They’re an elaborate front for a CIA spying operation.

Okay, maybe not that last one. The truth is I don’t know what’s going on. Maybe they are in some secret crisis. Or maybe they’re right, there’s nothing wrong and everyone is just being impatient with them.

Without any evidence to the contrary, I have no reason to dismiss their official story that they just need more time for a reason that is not entirely clear, that they’re working hard behind the scenes on some super big thing that will soon be revealed.

But considering how much they’re making us wait for it, it better be pretty darn big.

UPDATE (Nov. 7): La Presse reports one of the partners might be bought out. This confirms rumours I have heard, though hasn’t been confirmed by the partners. Such a change would require CRTC approval.

18 thoughts on “What happened to TTP Media?”