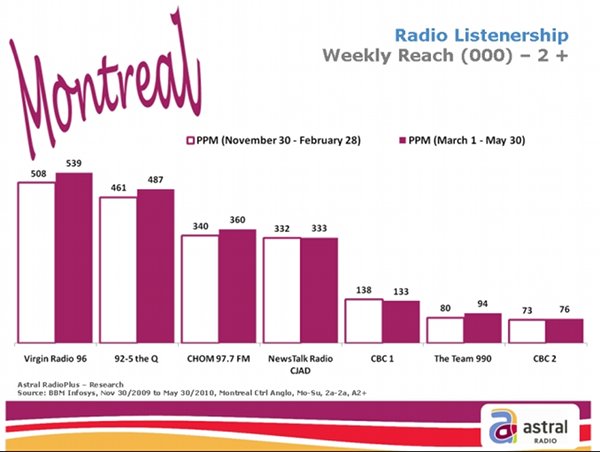 END_OF_DOCUMENT_TOKEN_TO_BE_REPLACED

CHOM has gone through a pretty big change over the last year, and particularly since the beginning of 2010. The morning team has gone through a complete turnover since Pete Marier joined in August. Chantal Desjardins joined in January, and PJ Stock was brought in to replace the departing Ted Bird.

On Feb. 1, the station rebranded itself, promising more and better music, though without being too specific about it.

Whatever they did, it isn’t working. According to the latest ratings numbers, CHOM is losing listeners just about everywhere.

The ratings cover the period from Nov. 30 to Feb. 28, which means only about a third of the latest ratings period covers the “new CHOM”, but it gives the first indications of how listeners reacted to the format change, and that reaction isn’t good. 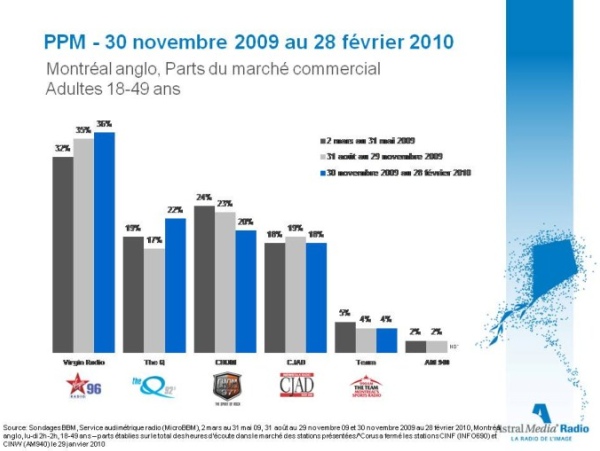 Astral Media, which compiles ratings information into boring webcasts, has created charts showing numbers for the Montreal region. They’re not complete (and, for those interested, they don’t give very useful information about non-commercial stations like CBC), but for the commercial market, it gives a good perspective of what’s going on.

CHOM, like CJFM and CJAD, is an Astral Media radio station, though the numbers come from BBM.

The chart above shows adults 18-49, a key demographic for advertisers. You can see that CHOM has dropped from second to third, and now sits behind Corus’s CFQR in the ratings (this will be a common theme in the numbers below). In the slightly older 25-54 bracket, it’s the same story, although there CFQR, CHOM and CJAD are neck-and-neck-and-neck with 21% market share each. CJFM holds a commanding lead with 33%.

END_OF_DOCUMENT_TOKEN_TO_BE_REPLACED

"Reach" (listening at least one minute a week), in thousands, for Montreal radio stations.

In terms of “reach”, which counts the same if you listen to a station for five minutes or six hours, Cogeco’s CFGL Rythme FM 105.7 still leads all others in the city, thanks mostly to huge numbers of female listeners (CKOI leads among young men) and CJFM has leapfrogged into second thanks, I guess, to non-stop Katy Perry and Lady Gaga that have put the 18-24 bracket in a trance. Otherwise, the rankings are about the same as they were three months ago. 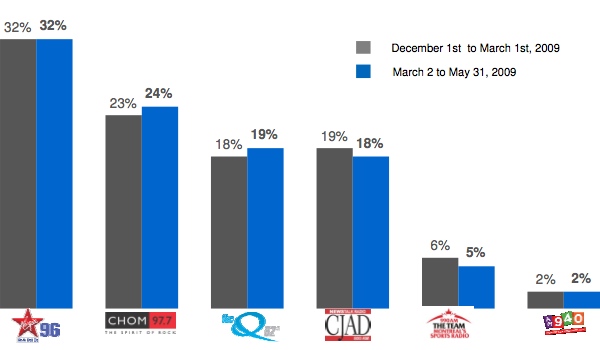 On the anglo side, this “commercial market share” graph (which doesn’t include CBC – Radio One and Two would be fourth and fifth on this graph), CJFM holds its commanding lead among adults 18-49, with a stronger showing for its morning show (CBC Radio One says it’s a strong second in the morning, ahead of CJAD) 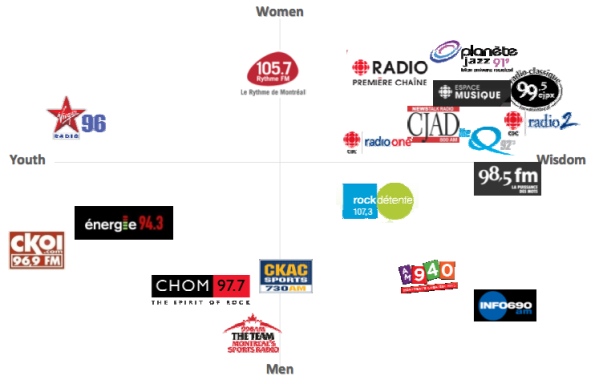 I particularly liked this chart, which shows what demographics the stations are tuned to. There’s a huge chunk in the older women category, while the rock stations appeal to younger men. Note CJFM and CFGL sitting pretty much alone targetting younger women listeners. Perhaps there’s a lesson there.

Looking specifically at CFQR, because this is a pretty good before-and-after with their relaunch in April, there’s not much to say. They’ve improved, but only to keep pace with everyone else: 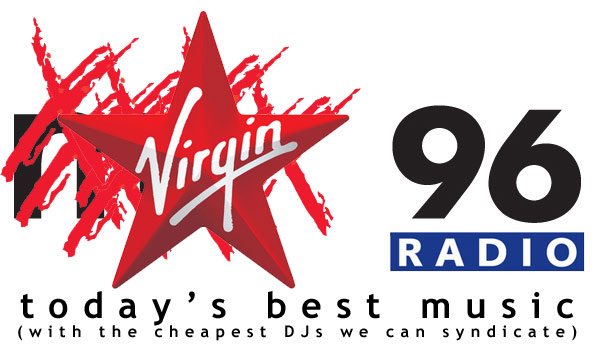 Though everyone at what used to be Mix 96 was really excited about owner Astral Media stripping out their (admittedly lame and generic) branding to replace it with one they bought form the British, ratings figures since CJFM’s new brand launch in January have shown little change for the station.

BBM figures for Dec. 1 to March 1 (PDF) using their new fancy-shmancy portable people meters show it has 16% of the anglo Montreal market, putting it behind powerhouse CJAD but ahead of its direct competition. Over the past few years, CJFM’s share of the anglo market has drifted between 13% and 20%. There was a slight uptick compared to figures from before the relaunch, resulting in about 8,000 more daily listeners, or an increase of about 1%. But that’s still well within the usual margin for error in radio ratings.

If Astral expected an audience jump from the change, it didn’t get one. But there wasn’t a widespread abandonment of the station either. When it comes down to it, people don’t care about the branding, so long as the music is the same.

For the French side of the recent radio ratings, Le Devoir has the numbers.

Congrats to CBC Radio One in Quebec City (104.7FM), who has cornered 0.3% of the listening audience for 12th place out of 13 stations.

Fortunately for them most of their programming is produced out of Toronto and Montreal.

Yesterday’s issue of Metro (PDF) sang from the heavens about the latest NADbank ratings report which showed that the paper gets 244,700 daily readers, just passing the Journal, La Presse and 24 Heures for the top spot on the island of Montreal.

(The figures are for the island, not the metropolis, since Metro is only distributed in the city’s core.)

The figures seem to represent a national trend, as free dailies are seeing huge increases in readership, and that increase, along with modest gains from the Globe and Post, are helping to raise the overall average of newspaper readership in Canada.

So call this one a victory for bite-size news with no analysis, and newspapers with no few journalists spewing out wire copy by the cheap.