END_OF_DOCUMENT_TOKEN_TO_BE_REPLACED

Especially when you’re hopping roofs on the way home.

Note: This post has been updated for the 2011 Super Bowl. For the latest on Super Bowl ads on Canadian cable and satellite, click here.

For 364 days a year, Canadians don’t care about what the CRTC calls “simultaneous substitution” – the policy whereby cable and satellite providers replace a U.S. channel with a Canadian one when both are running the same program. (The logic behind this is so the Canadian station gets all the Canadian viewers and can charge higher advertising rates.)

For Montrealers especially, the U.S. ads are pretty forgettable. Local ads for Burlington businesses or ads for products and services that Canadians don’t get. Besides, commercials in general are meant to be ignored. Nobody really cares whether the Ford ad lists prices in Canadian or U.S. dollars.

But then there’s Super Bowl Sunday. And while two teams fight for the National Football League’s championship trophy, many television viewers will be looking at the full experience, which includes a halftime show and insanely-expensive commercials. Advertisers turn Super Bowl commercials into events, building up hype and spending through the nose on celebrities and special effects to justify the through-the-nose spending they’re doing just to get the airtime.

So if you’re a Montrealer watching the Super Bowl and want the U.S. commercials, what can you do?

Here are your options:

Ways that no longer work:

Mario Dumont likes to point. And do things in slow-motion.

Because I’ve been a bit serious lately, here’s a kid with cookies.

Some more selections from the Quebec advertising archives from Johnnys96 and ladyjaye27:

END_OF_DOCUMENT_TOKEN_TO_BE_REPLACED

Another gem from the digger-upper of retro Québécois commercials. This one for my newspaper. (Don’t call that number, it’s about 20 years out of date.)

The Gazette’s Denise Duguay reports that Videotron did not, in fact, substitute its NBC HD channel for CTV HD as CTV’s press release suggested it would, meaning she was one of the few Canadians to watch NBC’s Super Bowl commercials without having to hook up an antenna.

Of course, for those who want to see them, they’re all over the place online: Just for Laughs, Spike, NFL, FanHouse, YouTube, MySpace. Some include so-called “banned ads” and other attention-grabbers.

Dominic Arpin provides some of his favourite ads. But really, they all suck.

Oh, and that was a good game today, even if I could pay only half attention to it.

It’s Super Bowl Sunday, and for those of you who have no idea which NFL teams are playing in the big game, you’ll probably want to avoid CTV.

The national television network is carrying over 10 hours of Super Bowl coverage on the main network, plus a bunch of stuff on TSN and even MuchMusic and Space (convergence marketing yay!)

We’ll remind you at this point that the Grey Cup, the championship game of the Canadian Football League, wasn’t carried on CTV but rather CTV-owned TSN.

In case you’re more interested in the commercials than the show (CTV News says it’s one of the big reasons to watch, without a hint of irony), well there’s bad news for you. CTV has ensured that as many loopholes are closed as possible to prevent Canadian viewers from seeing any non-CTV commercials. Bell TV is being forced to simultaneously substitute CTV for NBC nationwide, and Videotron has apparentl agreed to do the same across the province, according to the CTV press release I’ve pasted below.

CTV is planning on giving Canadians access to the commercials online (assuming I’m reading this correctly) at the Just for Laughs website. But I don’t think that’ll satisfy viewers.

So during the broadcast, we’ll be stuck with whatever CTV has to offer (assuming they even fill all their spots). We don’t even get the privilege of a spousal cheating ad.

Those of you who want to (legally) watch NBC’s Super Bowl commercials live have one remaining option: Hook up an antenna to your TV and tune in to WPTZ.

CTV encourages viewers interested in SUPER BOWL commercials to visit www.justforlaughs.com/superbowl, where many of this year’s advertisements have already been posted.

I actually remember this ad from 1994, when the then-STCUM introduced and publicized its seemingly revolutionary system where you could call a phone number and get the arrival time of the next bus.

The Telbus system (in which each stop for each route had a phone number attached to it) was eventually replaced with the current AUTOBUS, which has a single phone number and a five-digit code for each stop.

A second ad returns to a dry, if accurate, talking point for public transit: It’s cheaper and more reliable than a car in the long run.

Plenty of other (non-transit-related) retro Quebec ads uploaded recently too, including some related to the 1994 Quebec election, a station ID for Musique Plus and a French ad for CHOM FM.

The following videos are … not nearly as cool. They’re from the dark period of lame 80s/90s Quebec song commercials. All three have the same message: the bus and metro are much faster, cheaper and less stressful than driving a car and dealing with traffic and parking and accidents and stuff.

I understand computers are hard, and that filming a commercial with people you found off the street can be difficult. 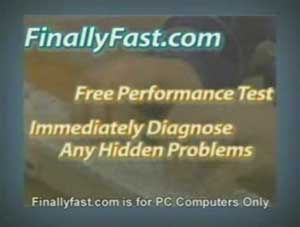 FinallyFast.com is for PC Computers Only

But when you say your product is for PCs only, 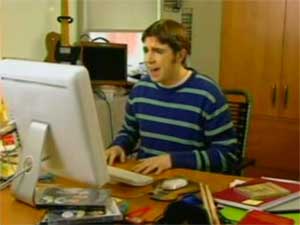 This iMac is apparently supposed to be a PC in the magic fairytale land of FinallyFast.com commercials

perhaps you shouldn’t show people using what are obviously Macs (albeit with the logos covered up). 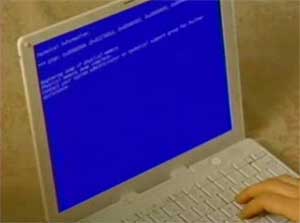 I can’t tell you how often I’ve gotten a blue screen of death on my iBook. Oh wait, yes I can. It’s never.

Discovery Channel Canada has started airing its version of the adorably awesome 60-second “Boom de ah dah” commercial developed by its American counterpart. See if you can spot the lame Canadian insertions.

The Leafs are officially eliminated from the Stanley Cup playoffs.

And Best Buy is there to rub salt in the wound: