I’m going through my feeds in Google Reader, cleaning up some dead wood from my over 500 subscriptions so I can compile a list of links for a blogroll. I went a bit nuts in 2007, subscribing to any blog I could find that was created by a Montrealer. So many of them haven’t been updated since then because their authors became disinterested, started up new blogs elsewhere or because the subject material became dated.

High up my list of “inactive” blogs was one that sounded familiar: “Une vie en musique”. That was the blog of René Lapalme, who wrote about music until his cancer forced him to write about that. I wrote about his blog, having never met him, shortly after he died (other bloggers had obits too). A few months later, it was wiped off the Internet. Now only a trip through the Wayback Machine can uncover some of what he said, because unevieenmusique.com is advertising cheap domains from Go Daddy.

Yes, Google Reader, I’m sure I’d like to unsubscribe.

This morning on Christiane Charette’s show on Radio-Canada, three stars of the Quebec web were invited to compile a list of the most influential Quebec web celebrities.

Like most ideas, this one was stolen from a similar worldwide list created by Forbes magazine, which put celebrity gossipist Perez Hilton at the top (just to give you an idea of what criteria they use).

All three of them posted to their blogs asking readers to make suggestions: Bruno Guglielminetti, Michelle Blanc and Dominic Arpin. Their posts got a bunch of comments (some of them wanting to plug their own blogs), and also prompted other bloggers to offer their own lists:

But there were also a lot of comments, especially from other bloggers, about how such a list goes against the entire spirit of the web.

Martine Pagé has the best writeup about the problems with this process, so much so that I feel kind of silly going over the same points. Her comments were also echoed by other bloggers.

Like her, I’ll admit that I scanned the lists at least subconsciously to see if I was mentioned. (Blanc said it best: “on se rend vite compte que les listes, on s’en fou, mais qu’il faut être dedans.”) More consciously, though, I wanted to see what kind of people made each list, and what kind of criteria were used to select them. Did the lists include:

They seemed to agree that their lists should be confined to those whose popularity stems mainly from the Internet (so no Lagacé). They also included people like Patrick Boivin and Michel Beaudet of Têtes à claques who don’t blog. Blanc explains her reasoning.

The mutually-agreed-upon top 10 are listed on Charette’s site. Guglielminetti and Blanc also provide their top 25 (Arpin says to look at his blogroll). It’s very easy to see the influence of the three on the list: lots of representation from web video producers (five), and tech/social media/marketing bloggers (three). Renart L’éveillé points out that news/opinion/political bloggers are conspicuously absent from these lists (probably because many of them are professional journalists and were excluded for that reason).

As Pagé points out, the same names tend to come up in these kinds of lists. That’s not because these three experts didn’t do their jobs properly and focused on their friends, it’s because that’s the nature of the Web. Your Web is made up of your Facebook friends, who you follow on Twitter, which blogs you read and which YouTube channels you’re subscribed to. There’s an infinite supply out there, and they’re all of different types, so everyone’s web is going to be different, which makes this list all the more silly (in their defence, the panelists are fully aware of how silly this exercise is).

There’s already an outlet for self-obsessed bloggers who want to rank themselves: It’s called Tout le monde en blogue, and it judges strictly by traffic numbers (participating blogs place counters on their pages, which show their ranking to their readers). It’s stupid, it’s vain, it’s shallow and it’s pointless. But at least it’s objective.

Maybe we should leave the lists to them.

UPDATE (Feb. 11): One of my blog’s loyal readers totally blasts me on his for this post for having suggested that I’m above vanity (which I don’t think I’ve done).

CBC Daybreak this morning explored newspapers vs. the Internet, and interviewed local blogueuse Kate McDonnell as well as Linkie Giuseppe Valiante. The interview is online (sadly, in streaming RealAudio format) on CBC’s website.

Both McDonnell and Valiante agree that local news outlets have to focus on local news, because international news is so accessible. 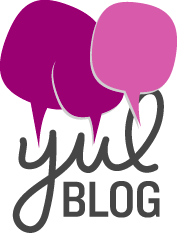 But once upon a time it was also a website that republished Montreal-centric blog posts from its members. That part fell by the wayside because the people behind it (essentially Patrick Tanguay) didn’t have enough time to maintain it (see Patrick’s comment below).

Now, organization of Yulblog‘s monthly meetings is being handed over to the new, less busy hands of Michael Boyle, and the website is being relaunched tonight to coincide with this month’s Yulblog meeting (8 p.m. at La Quincaillerie, 980 Rachel St. E., near Parc Lafontaine). It’s worth braving early January weather to go see.

I guess determining that the whole Fredy Villanueva thing and police not getting along well with young brown people has all been settled now, L’Actualité has ended its Montreal North blog. (Well, actually it’s made it “dormant”, which is kind of like when my ex-girlfriend said our relationship was just on a break – it’ll be forgotten about quickly.)

The Score, that sports channel nobody gets because it doesn’t show anything, has launched what it calls the “thescore.com Sports Federation”, a network of independent sports blogs for the various Canadian NHL teams, the Jays and Raptors:

Toronto’s Score Media Inc. has launched theScore.com Sports Federation, connecting together a network of independent sports websites, and empowering them to reach a larger audience – with the help and support of a national multi-platform sports network.

Here are the blogs they list, not one of which (except maybe CISblog) I’d heard of before today:

Now, I don’t follow non-Montreal sports that closely, so I’m not in a position to judge most of these, but is Lions in Winter really the best Habs blog out there? Better than Fanatique, Habs Inside/Out or François Gagnon?

Yes, my three examples are blogs backed by Big Media, but that’s kind of the point. Without the access and resources of big media (whether conventional big-city newspapers like The Gazette or La Presse, or hip new media like Branchez-Vous), all you have is some guy talking out of his ass (with all due respect to my fellow ass-talkers).

UPDATE: Getting some awesome linkhate from Drunk Jays Fans and RaptorBlog, who I guess dilligently check their incoming links. I must admit, calling me “Guy Faguette” is a rock-solid argument and really shows me how much I erred in suggesting these blogs might not be the most professional.

I just noticed something going through my blog reader: The Gazette’s upgraded blogging engine is now putting out full-text feeds.

It’s a trend (unfortunately too slow) of media outlets desperate for online attention giving their stuff away for free. Looking at other news media blogs, I notice that the majority now are full-text feeds.

Computer-generated excerpts that cut off midsentence

Manual excerpt (written by the post author), or title-only when none is written

Now that the U.S. election is over, Montreal bloggers are moving on to discuss more important things, like lollipop design, crusty old perverts at bus stops, squirrel videos and self-muppetization.

Unionized journalists aren’t the only people spreading around online petitions. Kristian Gravenor is peddling one to convince the Canadiens to have William Shatner sing the national anthem at a game.

The immensely popular Habs Inside/Out blog (run by my employer, who will be cutting me a cheque shortly for the plug) has introduced some guest blogging, bringing in devoted Canadiens fans to blog on the site in a section called The Other Wing. What I find interesting about this is that two of the four people are also blogers: Eric Engels writes about the Habs for HockeyBuzz.com and David Kellerman is one of the Four Habs Fans (you know, the one with boobies all over the place). They may not have all the access that a mainstream media outlet does, but they make up for that in enthusiasm.

In other Habs links (also from HIO):

Steve Proulx’s slow descent into madness continues, as he locks himself in a small room with only a recorder and a webcam to keep him company.

Thank you, Regis and Kelly, for making it clear to your viewers that Canada is, like, the first mainstream country which is clean and bright and nice-looking and articulate historic.

Now we can feel good about ourselves.

Dominic Arpin, the former TVA journalist, popular blogger and now host (again) of his own TV show about videos on the web, has finally launched a project called WebTVHebdo, which is a guide to web-based television shows. It’s a project he started a while ago with lackey Patrick Dion.

It covers international sensations like Ask a Ninja, but focuses on Quebec-based series like Le Cas Roberge and Les Recycleurs.

In a world where these things are popping up all over the place, a need quickly emerges to provide a reference, and Arpin and Dion have jumped on that void decisively.

Take your pick, everyone’s doing it:

The debate itself is an unintelligible shouting match, so I don’t think there’s much analysis to get out of it.

But feel free to analyze the liveblogs themselves below. Which is funniest? Most astute? Quickest?

UPDATE: My initial reactions: most of these liveblogs sound more like transcripts. Are these for people who can’t access TV? They seem to think that knee-jerk snark can replace rapid analysis. As the king of knee-jerk snark, I wonder why I’m not being paid to liveblog this.

My winner is the National Post, which has special software which works properly, has comments from a team of writers instead of one personality, and includes (moderated) comments from visitors with the liveblog comments. Losers include Le Devoir and Canoe, which didn’t have liveblogging at all.

UPDATE 3: Regan Ray at J-Source has a taste of the liveblogging action.

Le Devoir, the black sheep of Quebec media online (the only major paper in Canada that still locks articles to subscribers) has joined the blogosphere with an election blog.

It’s hardly a big splash considering the vast number of election blogs out there, but it’s a start. Here’s hoping some of their journalists continue to inch closer to the big scary Internet out there.